Cantata The glare and death of Joaquin Murieta

By Quilapayún, based on poems by Pablo Neruda

Pablo Neruda wrote the story of Joaquín Murieta twice: as a cantata, and as a play. Quilapayún rescues the cantata with a new musical interpretation.

The story of Joaquín Murieta took two forms under Pablo Neruda’s pen: as a cantata depicted in his novel La Barcarola, and as a play later transformed into an opera by Sergio Ortega. It was in the mid-eighties that Quilapayún set the version of La Barcarola to music, a project that was not completed, and remained forgotten for years.

Recently, the Chilean ensemble decided to finish the missing songs to present them to the audience in the way they were conceived from the beginning. Francisco Melo and Mariana Muñoz are spinning the story along with songs that illustrate its different moments. The ensemble's director Eduardo Carrasco is the author of the largest part of the composition.

The Cantata not only relies on its poetic character, Neruda’s poems which are what the performance as a whole originates from, but also on its musical expressiveness and the interpretative quality of Quilapayún, an ensemble with a long trajectory and highly valued creations. 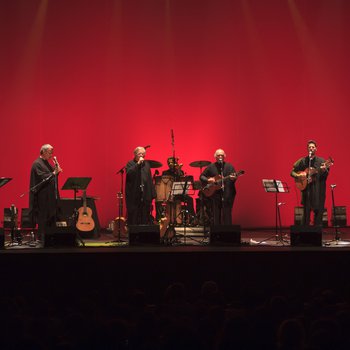 Founded in 1965 by Julio Numhauser, Julio Carrasco and Eduardo Carrasco, the famous Chilean band took up its career in the “peñas” (live folk music bars) of the Universidad de Chile in Valparaíso. Under the direction of Ángel Parra, they created their first official record, the interpretation of Parra's song El Pueblo. After a meeting with Víctor Jara, who would become their new artistic director, Quilapayún began to forge its identity, reflected in their topics and staging productions. In 1966 they recorded their first album, Quilapayún, which included compositions by the ensemble, as well as by Parra and Jara.

After Numhauser's departure, Guillermo Oddó joined the group. Together with Carlos Quezada, they became Quilapayún´s characteristic voices for many years. With hundreds of tours, concerts, recognitions and the composition of some of the most relevant pieces in the history of Chilean music, such as La Cantata Santa María de Iquique and La Muralla, Quilapayún is a patrimony of Chilean culture, still as relevant as in its beginnings.